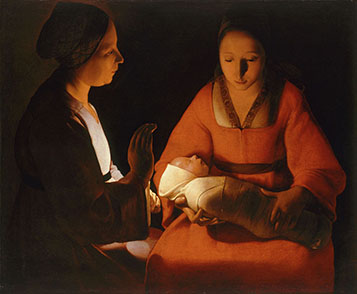 Georges de La Tour- "Newborn Infant" 1640s. Note the gradual transition from light to dark across round forms, and the extreme contrast of value where a light form overlaps a dark background.

Chiaroscuro originated as a concept in Renaissance art to describe the handling of light and dark contrasts. It continues as a fundamental concept in representational art, photography, and cinema, particularly where light and shadow are used to create a dramatic or theatrical effect.

Chiaroscuro (Italian for 'light-dark') is fundamentally about contrasts, from subtle to extreme. Contrast- the degree of difference between colors- can be subtle, like the gradual difference from light to dark in shading across a form, or extreme, like the gleaming light of an illuminated face against a black background. 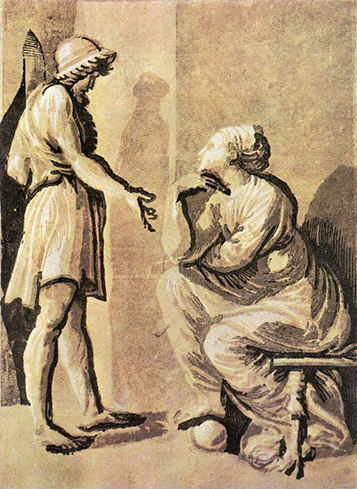 Chiaroscuro provides a way to organize values and contrasts and create focal points within a composition. In a preliminary drawing, this might involve reducing values to light, dark and midtones, or direct light, shadow and reflected light. The principle of chiaroscuro also involves organizing value contrasts from most extreme to most subtle. A strong value contrast doesn't require the lightest possible light to be placed against the darkest dark, but a composition organized by value contrast should have a passage where contrast is strongest between light and dark.

Paint handling can also be guided by principles of chiaroscuro. Particularly in the Baroque Period, white was employed as analogous to light, with thickness of paint communicating intensity of illumination. 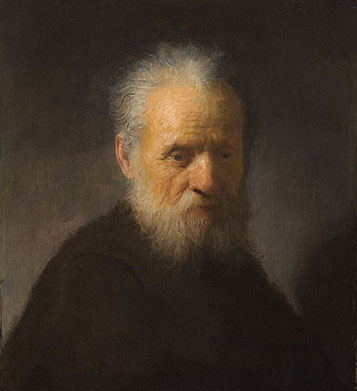 Portrait by Rembrandt showing use of heavy whites where strong, direct illumination is present

By reserving heavy application of white for passages of direct light, areas of the subject that are in direct light seem to advance. Reflected light can be made to recede visually by painting these passages more thinly. 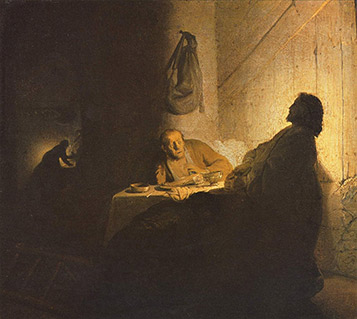 Painting by Rembrandt where strong dark-over-light value contrast is used to advance the foreground figure, while subtler differences in value are used in background figures

Subtle relationships of value can be as important as extreme contrasts in application of chiaroscuro. Controlled gradations from light to dark can be used to describe a volume or form that is illuminated from a single direction. A figure that is depicted in darkness can be rendered in a narrow range of dark tones, or a brightly illuminated subject may be rendered in high key values.

Organization of contrasts and control of value is at the core of the chiaroscuro concept. Historical painters understood that control over light and dark values was the key to pictorial power and descriptiveness. This is the reason why contemporary teaching systems still emphasize this very old, but still highly relevant approach.